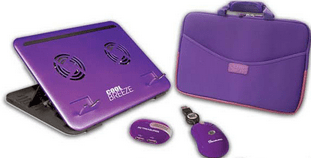 What do you think would be the most important notebook accessory? Yes! A good quality notebook bag of course. Second? A Heat Dissipating Cooler Or Pad is very important to the life of your notebook computer.

Forget those that are bundled with your notebook computer. Get yourself a good notebook bag that is well-padded both on its load-bearing straps, and 100% around the notebook itself.

Aren’t all notebook bags built the same? The answer is NO. There are countless bag types and variations. Not all of them have your comfort and protection of the notebook itself in mind. Most of them sacrifice style for substance, which is worse than not having a notebook bag in the first place.

The best way to determine which notebook bag is the one for you is to bring along your notebook while shopping. Put it in the bag and ensure that it doesn’t slip and slide around. Generous spaces do not mean better protection! You want it to be snug.

Carry the bag with your notebook in it. Simulate a light jog. Why? Experience tells me that’s how you’ll most likely travel through the gates of airport hell. If the straps start digging in those shoulders, start looking for alternatives. A good strap should cushion those shocks as the bag bounces off your shoulders while doing your airport jog. Note also how the notebook bag opens up for main access. Again, if you’re a frequent traveler you’ll want to have one that’s easy to retrieve and store your notebook for security checkpoint purposes. The best are usually top-loading ones secured by either a zipper or a flap. We recommend the flap versions because they usually have an additional layer of cushioning right around the top for the notebook, and secure well but open fast with magnetic snaps/buttons.

The zipper types have none, and your poor notebook will get whacked full-force if the bag topples head-long off an airport luggage cart. Trust me on this bit: I’ve had enough times my notebook took a tumble that way, and seen many other helpless souls literally spill their notebook’s guts across airport gates.

A good alternative to those shoulder-loading bags are the rolling pilot cases. They are typically bigger than any shoulder-bearing bags including backpacks, but offer solid protection with a padded hinge-top opening similar to actual pilot cases. Roller bags are also less taxing physically, and the generous compartments in the bag means less luggage pieces to carry while traveling.

A Heat Dissipating Cooler Or Pad

Heat is the number one notebook computer killer. Today’s notebooks are little thermal generators, with internal temperatures that rise up to 150 degrees even with built-in cooling fans.

Those internal fans and heat-dissipating systems work full time more often than you think. That’s why they are usually the first components in a notebook to die on you. When that happens, you’d better not fire up that notebook, as it’ll fry even before you see the start screen.

So help out your hardest working notebook component and extend its lifespan. Invest in a notebook cooler or a cooling pad. Notebook coolers typically are low-rise, plastic or metal-faced pedestals on which your notebook sits. They are equipped with a fan or two inside, which serves to draw hot air away from under your notebook, and thus promote a cooler operating environment. Usually efficient enough to drop up to 15 degrees the operating temperature, notebook coolers however require power for its fans and would typically draw its power off your notebook’s USB ports. This could somewhat decrease your notebook’s battery operating time, but so far have proven to be negligible for many users.

Cooling pads normally do not have the fans, and are constructed from some type of heat-dissipating material or designed a way that your notebook would have extra clearance at the bottom to promote natural air circulation. Despite the lack of fans, these cooling pads do a surprisingly good job of cooling your notebook. They are also much easier to carry with your notebook because they are slimmer, lighter, and do not require power to do its job therefore highly recommended.

There you have it, the two most important notebook accessories: a notebook bag and a heat dissipating cooler or pad. Both of these will pro-long the life of your notebook computer.